Yes I have fallen off the wagon once again, however not as badly as normal. I have indeed been book shopping and swapping and today this is what the results of this hard labour of book addiction produced. 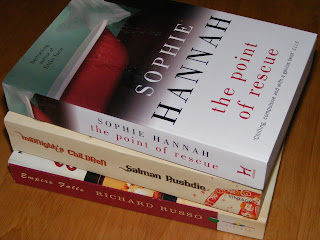 Point of Rescue - Sophie Hannah
I have only been introduced to the work of Sophie Hannah this year through her short stories and the first of her crime or 'fiction with a crime twist' writing 'Little Face'. This was quite a find as the paperback isnt out for another week! You could tell it was a sneaky leaked review edition as some of the pages needed trimming.
Midnight's Children - Salman Rushdie
We were discussing this at book group and it was second favourite to be the book we read but lost to the below... However with all the fuss about Rushdie and the Booker of Bookers and the Man Booker Loglist this year (I admit I have joined in the fuss) so feel I should see what all the fuss is about. A readitswapit book.
Empire Falls - Richard Russo
This won the vote for next months book group book. I have never heard of the author ever, even though this book won the Pulitzer Prize back in 2002, its been a nightmare to get hold of but I managed to find a second hand American import in one of the shops on Charing Cross Road today (I almost bought another ten but settled with just this and Sophie Hannah) I will be visiting thes shops much more often.
Posted by Savidge Reads at Friday, August 01, 2008