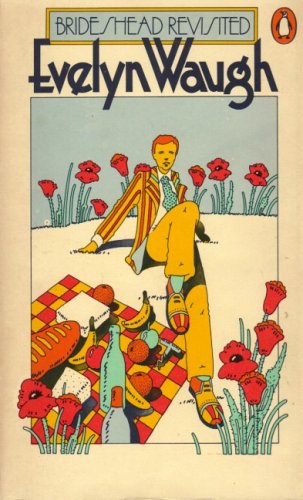 So after leaving book group (I know shocking) myself and Polly have started ‘Rogue Book Group’ in which we only read books that we both already own or read the books that have been recently made into films and then watch the movie. Oddly this is how the previous book group started with ‘Memoirs of a Geisha’ so it seemed write to do it again and start with Brideshead Revisited especially as we both wanted one of the fabulous old covers as shown. See sometimes you should judge a book by its cover.

Charles Ryder is a bit of a misfit, he doesn’t seem to have a particular place in school society until he starts at Oxford and meets Sebastian (a grown man who carries a bear everywhere he goes) someone who is he warned to avoid. Soon the two of them have become the thickest of friends with an added certain tension in the background. Before long he is invited to meet Sebastian’s family at Brideshead. There he meets Sebastian’s mysterious and enticing sister and his domineering mother, the fabulous, Lady Marchmain. He also discovers the catholic undercurrent that rules everyone in the families lives some for good most for bad. Before long he is embroiled in the entire goings on at Brideshead and a tug of war for his attentions from the siblings. It doesn’t sound as thrilling as it is, seriously its brilliant.

I loved Evelyn Waugh’s tone and prose with his writing and I didn’t think I would, it was stunning I think one of the best written books I have ever read. I wasn’t expecting humour in the novel yet the scenes between Charles Ryder and his father were absolutely hilarious. In equal measure this book is filled with venom (Lady Marchmain) and sadness and it all mingles into what I think is one of my favourite ‘classics’ – hoorah, a classic that deserves its hype.

Sadly neither myself nor Polly had finished the book before we saw the movie (which is very good despite reviews saying the contrary) and therefore when I was reading the final third of the book the characters I had visualised clashed slightly with the ones in the film but didn’t ruin it by any means. What I found shocking was not the relationship between Sebastian and Charles but the obvious contempt for Catholicism Evelyn Waugh had, religion really ruined and tortured some of the characters in this novel and back when the book came out I can imagine a lot of people had issues with that.

A beautifully written incredibly deep and dark tale which is delivered subtly and I just thoroughly enjoyed, I know I will read this again.
Posted by Savidge Reads at Friday, October 10, 2008