I personally think that when you open a book that you know very little about and start to read it you give it a much fairer chance than you would a book that everyone has been raving about which I think makes you judge it more harshly. So what about a book that people you know and trust choice wise don’t really care for? I tend to write them off from the start and having heard some reviews of Penelope Fitzgerald’s 1979 Man Booker winning novel Offshore, I wasn’t sure how I was going to feel about this book at all. But I have set myself the challenge of reading all the Man Booker Winners and so I gritted my teeth and… enjoyed it.

Offshore is set just as it says off shore. The shores in particular aren’t some glistening desert island but instead London in the late seventies, which was actually ‘the now’ when the book was released. In a small little community ‘belonging neither to land nor sea’ we meet the various residents of the houseboats of Battersea Reach. There are three main characters in the novel that we follow; Richard a man in a mainly unstable marriage who tries too keep everyone’s spirits up and is in some ways ‘the captain’ of the community, Nenna who has randomly bought a boat to live on with her daughters and husband, that latter of which never moved in and Maurice a male prostitute by occupation who is also looking after stolen goods.

How does a book that is only 180 pages and less than 50,000 words manage to encapsulate this society through the day to day and slightly unusual dilemma’s I hear you cry? Well that’s why I think it won the Man Booker. Though I could actually have read a lot more by the end of the book there isn’t much left to add. Just as quickly (and as wonderfully descriptively) as you are thrown into these people’s lives you are equally quickly (and wonderfully descriptively) thrown back out. These are snapshots not life stories and I quite like that in novels, especially with such a jumble of characters as this book has.

I happily meandered through their lives (it isn’t a fast paced book at all), some mundane and average, some dramatic and emotional like a barge meanders down the Thames taking in all the scenery along the way. It is very much a London book and very much a book about normal real people, both factors I like in any book. I have to say my favourite characters and therefore parts of the book because they were in them were Nenna’s children Tilda and Martha. I wanted to join them on the muddy banks of the river finding hidden treasure’s and running wild. This is a very economic book, sparse in words but full of vivid imagery and characters. I am so pleased that I had taken up the challenge and found what may not be on of my favourite reads of all time but fine example of simple, pure literary fiction from an author whose work I want to read more of.

This book has also brought up a little something that I did want to mention though and that is the timing of reading books and how you might relate to a book dependent on mood, where you are etc. So for those of you who have read the book and think I might have gone crazy, I will leave you with an image of where I was reading it (it’s very short so only took me a few hours)… 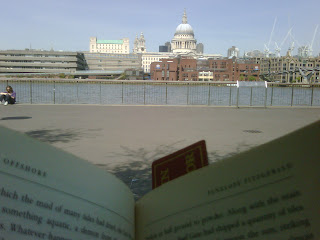 I think the surroundings whilst I was reading were quite perfect for this novel.
Posted by Savidge Reads at Friday, April 24, 2009

I'm pleased that you enjoyed it.

I think you should learn to ignore some of my bad reviews, as I am clearly much more fussy than you!

I need some action, some emotion or some really great characters in a book, otherwise I quickly get bored. I'm not interested in everyday life of normal people - it is just not exciting enough for me. You'll probably enjoy the rest of the Bookers much more than me, as there are quite a few like this.

I'm looking forward to your opinion on White Tiger!

I have wanted to read this for a while. Lovely picture too!

You are absolutely right about that. It makes all the difference in the world as to where you are reading something, and even more meaningful if the setting fits the book. When I was working in England early in my career, I read "Pillars of the Earth", and all the while I was meandering through the little towns in the country on the weekends seeing the beautiful churches. It was probably one of the most impactful books I'd read for that reason.

I love Penelope Fitzgerald. I have all her books but haven't read them all yet and this is one I have not. She is amazingly able to fit vast amounts of story into very few pages. Her most fun book was The Golden Child. Quite different from some of her others.

By the way I finished Child 44 last night. I wasn't going to read it but was convinced by your interview with Smith. Now I can't wait for the second. I will be doing a review later today. Thanks.

Jackie - I wouldn't ignore any of your reviews. I think its really interesting that in some books we are completely alligned with the love of certain books and with others not, but thats what makes book lovers and bloggers so interesting. Glad you got the books, will email you properly later today.

Juxtabook - I would give this a go asits just incredible (to my mind) understated writing. You read it for the prose more than any gripping action if you know what I mean?

Sandy - I think I might do a blog about setting (perfect reading for Pillars of the Earth with all that setting), moods and most importantly the font type of a book, I cant bare some of the fonts books are typed in and it can actually ruin the reading of a book for me.

Candy - I shall look up more of her work definately the Golden Child first from your recommendation. Glad you liked Child 44, its very, very good.

I had heard such good things about PF (and I love the mostly-white covers) but when I read Human Voices I was pretty underwhelmed. But then a friend gave me The Bookshop, and I was blown away - it's brilliant, very moving and very interesting. And short!

I loved "The Blue Flower" sheer genius the way she recreated the language and minds of Novalis' time and place.