Books for the new Budget...

Now I promise that I won’t go all political in this blog as that’s not really what it is about. However I did have an email a couple of weeks ago from someone who wishes to remain nameless who sent me an email that said…

I read your blog regularly and love to read your reviews. I have always been an avid reader of books but hardback books are just completely out of my price range and my library rarely stocks anything new, if it does then their tends to be a waiting list that goes past the publication date of the book in paperback. I know there are charity shops but even these seem to be expensive, if a book is in good condition its over £2.50 which is a bargain but still isn’t cheap, you could pay a pound more in Tesco’s. I just wondered if you knew anywhere else.

I felt a little bit like a book agony uncle, which is a nice feeling! The email really made me think though. I am very lucky and get some books sent for free from publishers and am in a job that means I can pay for my book addiction too. I dont tend to touch hardbacks myself (bar the ones lovely publishers send) unless its a very special author and I simply cannot endure the paperback wait as I do think they are really expensive and far too big for commuting bags, though they do look delightful. I am being cautious though with my spending as I think everyone is.

Now of course the best place for cheap, well actually free, books in an ideal world is your library, however (unlike the lucky Americans who pop by on this blog) we don’t have the best library system in the world here in the UK and certainly not in my borough. I know it’s better than a lot of library systems in the world but it does have its pitfalls. I went a few weeks back and couldn’t believe they charge you £3 to order a book in, now that’s more than buying a book in a charity shop that you can keep or pass on after. My local library is currently closed (see picture below) so I also have a bit of a trek to the nearest one and though I came away with some great books (of which I have not read one yet and renewed twice - whoops) none of them were on the hit list I had written before I left. The new library might be better, we will see. 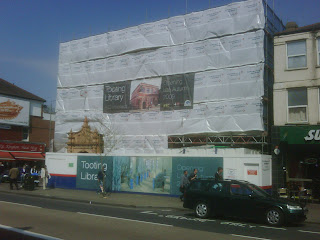 So then of course there are second hand book stores and charity shops. I don’t begrudge paying over £3 in an independent book store as its their livelihood and I certainly don’t begrudge giving money to charity but charity shop books have shot up in the last year, has anyone else noticed this? Of course as you will see from last weekend there are still some gem charity shops to be found (18 books for £5.50) you can’t go wrong but not everyone has such dens of sin locally. I have now found a surprising new high street store though where you can find cheap books quite by chance!

I had gone to the high street with the Non-Reader to pop to the pound shops as they sell some amazing Brazilian (the Non Readers homeland) coffee, now my area in South London has lots of little pound shops but recently after loosing Woolies the empty store has been filled with one of the chain pound shops (this seems to be happening everywhere) and its huge. Imagine my complete surprise when I came across a book section! Imagine my increased joy when I saw that there were actually good books all for just £1… 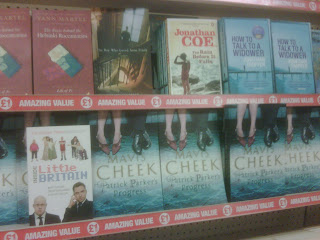 I was very restrained and only came away with three. I picked up The Boy Who Loved Anne Frank by Ellen Feldman who is in the Orange Shortlist (more on that very soon, very excited) with her latest novel Scottsboro and also The Facts Behind The Helsinki Roccamatios by Man Booker Winner Yann Martel. I also bought a copy of Digging To America by Anne Tyler for my Gran to take when I go home ‘oop north’ next week as she likes Anne Tyler and I read this last year and loved it. I could have walked away with many more. I already had How To Talk To A Widower by Jonathan Tropper, though I could have bought it for a few other people, there was also Patrick Parkers Progress by Mavis Cheek, The Rain Before It Falls by Jonathan Coe, and Inside Little Britain as pictured. Plus as I mentioned there were titles by Anne Tyler as well as DBC Pierre and many, many more. I was pleasantly surprised but didn’t get carried away as had the word ‘budget’ going over and over in my mind.

Have any of you found some gem bargain book places? Do let me know! Now I must get back to The Name of The Rose by Umberto Eco which of course is this weeks Savidge Reads Big Weekender choice, enjoying so far but am shockingly only about a hundred pages in.

I really feel this guys pain! I use my library extensively, but past that, over the pond here, there are a few places you can go to get really good deals (besides the used book places). The library often has book sales, where they offer hardbacks for $1 and paperbacks for 50 cents. Yard sales are fantastic, but you have to really dig to find good stuff. You can sometimes get a whole bag or box of books for $1.

Where abouts does your emailer come from?

I'm sure you can find great, cheap books in a charity shop anywhere in the UK for £1 or less. You just have to know which ones to look in.

Carboot sales are also a great source of cheap books.

There is also readitswapit or bookmooch.

I am starting to read some newly released hardbacks, but if you sell them straight away then it doesn't cost very much.

Not all of us Americans have good libraries. I live in a very wealthy community and our libraries are quite stunning to look at but their book selections are dismal. I never use them any more.

Charity shops over here have gone up quite a bit lately which seems a bit counter-intuitive to me. When times are tough shouldn't prices go down?

I have one good used bookstore in my area and the books are really cheap. Of course that doesn't help any of you as it would entail a transatlantic flight.

I get my best buys on Amazon with their used books. Sometimes you can get a book for a penny which means you pay only the postage.

Your library "charges you £3 to order a book in". Where is the gobsmacked icon?

Mine is free, provided they decide to order it .... kind of makes up for the Scottish weather, doesn't it?

Stalls in antique centres might be a place to try. Until I took a stall myself I had not realised that so many book stalls were hidden amongst the china and so on in these places. I put quite a lot of cheap stock on my stall - by cheap I mean a quid per paperback (both the centre and I have to make a profit and I pay for my books too) for penguin classics or modern lit fiction. My stall is in Morecambe, Lancashire, and there is no mention of books outside the hall but there are at least 4 bookstalls in there so these places are worth a look even if there seems to be no sign of books from the outside. Many towns seem to have little centres, arcades or markets for antiques.

Believe it or not there is only ONE charity shop, that I know of, in the whole of Hong Kong! It is very expensive and has no book section to speak of.
I do empathise with your correspondent, as I cannot find anything here in the second hand book line under GBP 4, so my reading habit is a very costly one - how I envy you having all the above cheap book purchasing options. I wonder if charity shops have ever thought of shipping overseas!
Good luck with Umberto, Simon.

Sandy - I wish we had more yard sales in the UK we certainly dont in the joys of London or as Jackie mentions the delights of Car Boot Sale!

Jackie - I have never had much luck with Bookmooch I just didnt get it. Readitswapit I loved until 3 people took my books and never sent any back. I would do the whole hardback read and resell but I like to keep my books, am a bit of a horder. Am off up north next weekend and they have the cheapest second hand shops, I will be in heaven... and I think we might be doing a carbooter too!

Candy - the idea of being able to hop on a plane for cheap books is something I can dream of.

Juxtabook - I never think of Antique shops or markets. Hmmm thats really helpful. In London we have a street of antiques book shops and second hand book shops but being London its extortionate.

Thanks to all of you for your help!