A few days ago I mentioned that myself and Jackie from Farmlanebooks were planning to read all the Man Booker winners. We still haven’t come up quite with the how’s and the when’s but one thing that we did do last week is compare how many books we have both already and my five to her fifteen seems a little pathetic. So I naturally have some catching up to do. I also have quite a lot of books to get my hands on. So whilst taking a break from the latest Savidge Reads Big Weekender Read (which is Memoirs of a Midget by Walter de la Mare) I met up with a friend and we hit my favourite second hand book shop and look what I managed to find… 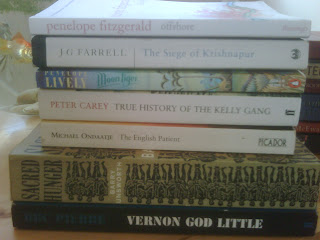 Seven of the Man Booker winners that I didn’t already own (ok actually in the first shop I only found four I found another three in a charity shop that was having a half price sale on books for the day) so now I have gained Offshore by Penelope Fitzgerald, The Siege of Krishnapur by J.G. Farrell, Moon Tiger by Penelope Lively, The History of the Kelly Gang by Peter Carey, The English Patient by Michael Ondaatje, Sacred Hunger by Barry Unsworth and Vernon Little God by DBC Pierre. Now those of you who know me well and those of you who may have seen something behind the books in the above picture (not the fish, there’s a clue) will see that that’s not quite all I bought. 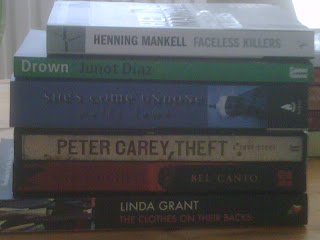 Yes I bought just a few more books. My aim and mission was for Man Booker Winners only however I then saw The Clothes on Their Backs by Linda Grant which was shortlisted for the Man Booker so I thought that sort of counted. I always like the shortlisted books. I also saw Theft by Peter Carey which of course says “twice winner of the Booker Prize” all over it, so that sort of counted too. I spotted two more Prize Winner related books (which is sort of a good excuse) Bel Canto by Ann Patchett which won the Orange Prize in 2002, I am thinking of doing all those winners at some point. There was also Drown the debut by Junot Diaz who won this years Pulitzer Prize with his second book The Brief But Wondrous Life of Oscar Wao’ which I will be reading very soon. The other two books? Well those I blame on some of you, the delightful Dot Scribbles absolutely raved about She’s Come Undone by Wally Lamb and Harriet Devine has been raving about Henning Mankell’s Wallander series the first of which is Faceless Killers. Now having totally scrapped my original reason for book shopping I thought in for a penny in for a pound… 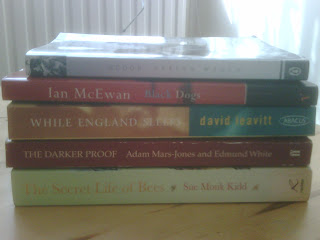 And I got five more books (partly because the shop that normally does 5 books for £2 was actually doing 15 for £3 this weekend to get rid of as much stock as possible before they move over the road) that I just plain and simply wanted to read. I have been after a copy of Black Dogs by Ian McEwan for ages as I am a big fan of his work, Scoop by Evelyn Waugh has been on my hit list for ages as has The Secret Life of Bee’s by Sue Monk Kidd. I loved Pilcrow by Adam Mars Jones earlier this year and him writing with Edmund White who’s works I like seemed like a great collection of co-written short stories, plus its quite hard to get. While England Sleeps by David Leavitt was an accidental purchase as I got Leavitt mixed up with David Ebershoff who wrote The 19th Wife but never mind, after all this whole collection only set me back £5.50. No more buying books for a very long time I think. Did I make good choices? Have you bought any great bargains lately? I have seen Dovegreyreader has had a similar shopping experience to me this weekend, have any of you?
Posted by Savidge Reads at Sunday, April 19, 2009

You are so funny! You had a binge! I think it is a great idea to read all of the Man Bookers. I am so far behind anything you and Jackie have done...I think I may have read one or two. Of all those books you purchased, the only one I've read is "She's Come Undone", which was very well-written and a very quick read. I found it to be little unsettling for some reason, but definitely recommended!

Oh thanks Sandy I shall give that one a go in the very near future. I think with the Man Bookers am gonna go for some of the shorter ones first. Oh and the binge got worse I bought another Man Booker winner when accidentally fell into a charity shop on the way back from the Market!

Blimey you could set up a small shop! I loved Peter Carey's Theft but I haven't read many of the others. I have my eyes peeled for a copy of Scoop too - one I have wanted to read for a while.

Thanks Catherine, oh to have my own bookshop would be an absolute dream!
Glad Theft is good it was one of the rogue choices I made.
Scoop I have been meaning to get for ages, any Waugh I can find I buy if I don't already own even though only read Brideshead I know will read much more one day.

Unfortunately for my budget I have that shopping experience far too often.

I think my all time favorite Booker winner so far is The Life of Pi. The Line of Beauty was wonderful. Vernon God Little was quite strange and I hated The White Tiger. You have a lot of outstanding reading ahead.

I have read all of Ian McEwan and in my opinion he is the greatest English writer living. Except I hated On Chesil Beach.

The great thing about Booker prize winners is that they are really easy to find in charity shops!

Perhaps there was something in the air this weekend because I went out book buying too - as if I need more books to add to the tbr pile!
Hotel World - Ali Smith, Neither Here Nor There - Bill Bryson, Gentlemen of the Road - Michael Chabon, Gilead - Marilynne Robinson, Cat's Eye and The Blind Assissin - Margaret Atwood(entirely your doing, Simon!!) and guess what else?.....The Secret Life of Bees - Sue Monk Kidd!!
After your recent review I instantly jumped into The Blind Assassin, all the time wondering what excuse I could give to Audrey Niffenegger for pushing The Time Travelers Wife back down the list again!!
I love the image of you accidentally falling into charity shops - funny how that happens!
Any advice on the order I should read these books in after I finish The Blind Assassin?

Thank you so much for the link in your blog post, that is so lovely of you! I hope you enjoy the Wallander series too, I really liked Faceless Killers, the tv series with Kenneth Brannagh in was really well done as well.

This weekend marked the Friends of the Seattle Public Library book sale. All books for a dollar.

I have 14 new finds. And feel amazing about it because I'm only fourteen dollars poorer.

Candy - It's true with the Man Bookers they can be hit or miss but wether you love them or loathe them the writing is always incredible.

Jackie - I am having real trouble with the earlier ones, even at the book shops that normally have everything... will keep hunting though, might actually read a few first.

Kim - Though I loved The Blind Assassin its not everyones cup of tea so if you hate it please dont blame me ha! Also... read The Time Travellers Wife... now... its amazing!

Dot - love your blog so why wouldnt I, you inspired me to buy something I wouldnt have considered reading and I should be thanking you... well I am lol.

Ophelia - that is indeed some great bargin hunting!

i have weirdly the same taste in books as you! but that is a huge spree!

black dogs is one of my favourite McEwans. enjoy...