Only six days into the New Year and I am going to have to edit one of my resolutions already. It was that tricky one of not really buying anymore books. I think what I should change it to ‘not buy anymore new books’ or ‘only buy classics from charity shops’. Or maybe a mix of the two, I’ll work it out later? Anyway on my way to Sainsbury’s to stock up on post holiday food and happened to stumble into my two favourite charity shops. By the time I left I had bought five ‘classics’ and all for under £3, now really how could I say no? 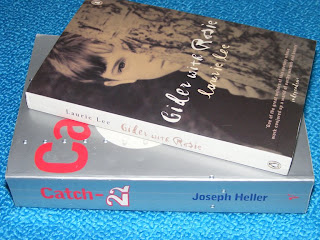 Cider With Rosie – Laurie Lee
I didn’t know very much about this when I saw it on the shelf and yet I instantly knew the name. However looking at the blurb it sounded quite interesting. A memoir of life in a Cotswold village in the 1920’s before cars or electricity revealing what life was like in the not so distant past that is also like another world. I can’t wait to read this book.

Catch-22 – Joseph Heller
Another book that I know very little about but have seen so many times on peoples shelves (well we all like a nosey don’t we) and have been recommended is this one. So I decided that with a classics year ahead it was time for me to bite the bullet and read this one. I didn’t realise that it was funny, or is meant to be, what’s always put me off I think is that its labelled as a ‘war novel’ and sometimes you just have a bit too much war. 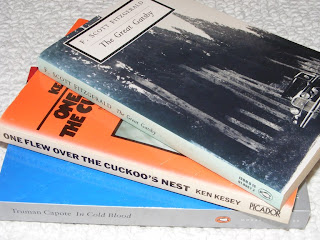 The Great Gatsby – F. Scott Fitzgerald
Another book that I have always wanted to read but have yet to, I do hope it’s better than ‘Tales of the Jazz Age’ which I didn’t enjoy at all. This is meant to be one of the great, great modern classics. In my head I am going to love this as much as I did Evelyn Waugh’s Brideshead Revisited.

One Flew Over The Cuckoo’s Nest – Ken Kesey
I always got this and Harper Lee's ‘To Kill A Mockingbird’ mixed up and having read one I was delighted to find the other in a very short space of time. The biggest thing that made me want to read this apart from it being ‘groundbreaking’ and set in a mental institution was the ‘tyrannical Big Nurse Ratched’ that character sounds far too promising and fascinating. Plus I haven’t seen the film so have that to look forward to afterwards.

In Cold Blood – Truman Capote
I actually owned this for a while but never read it and as it had a coffee stain and was given to me I gave it to charity. I managed to find a new pristine copy, but may also have to go back for another 70’s edition that Novel Insights wants and we may do this as a Rogue Book Group choice in the future. This caused controversy on its release due to the fact it reconstructed the murder of a farmer and his family in Kansas in 1959 exploring the investigation and everything that happened to those involved. After devouring Kate Summerscale’s ‘The Suspicions of Mr Whicher’ I though this would be right up my street.

I also have Laurie Lee on my bookshelf (not the actual man, you understand) waiting to be read... bought a four-in-one of his work. One day!

The 'not the actual man' comment almost made me choke on my afternoon/evening coffee! I will admit to something, no I dont have him trapped in my house or on my shelves either, I thought he was a she until you said, didnt read the blurb as well as thought I did Ha!

I've given up trying to limit my book buying, as I end up saddled with guilt but buying the book anyway!

In Cold Blood has been on my TBR pile for ages, it is meant to be a very disturbing true crime book which Harper Lee helped Capote research.

I've just read a tempting review of Cider with Rosie at one of my favourite book blogs. You might like to check it out here.

Catch 22 is a war book like no other. Heller was a pilot for the US Air force in WWII, and this is a satirical account of the ridiculous nature of war and army service. It's a favourite of mine, especially as Yossarin lives (which will make sense when you read it).

Thanks for the link to books please, I will check out that blog when get home tonight! Loving the rumours of the Harper Lee and Truman Capote goings on! Am deeply embroiled in American Psycho at the moment!