Gift From The Gate

Thank you very much to the delightful people at Canongate who sent a parcel containing the following on Saturday. I am really excited about all of these but mainly The Gargoyle for story and my Richard and Judy Challenge, I also love Ali Smith! 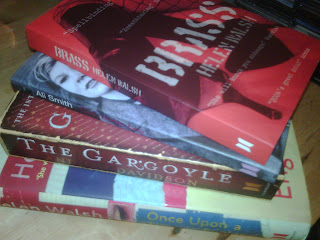 Brass – Helen Walsh
Nineteen-year-old Millie O'Reilley is clever, spiky and adored by men - yet utterly forlorn. Increasingly disillusioned, she seeks an escape in the underbelly of Liverpool...Shockingly candid and brutally poetic; Helen Walsh has created a portrait of a city and a generation that offers a female perspective on the harsh truth of growing up in today's Britain. Brass is an unsettling but ultimately compassionate account of the possibilities of identity and the desirability of love.

Girl Meets Boy – Ali Smith
"Girl Meets Boy" - It's a story as old as time. But what happens when an old story meets a brand new set of circumstances? Ali Smith's re-mix of Ovid's most joyful metamorphosis is a story about the kind of fluidity that can't be bottled and sold. It is about girls and boys, girls and girls, love and transformation, a story of puns and doubles, reversals and revelations. Funny and fresh, poetic and political, "Girl Meets Boy" is a myth of metamorphosis for the modern world.

The Gargoyle – Andrew Davidson
The nameless and beautiful narrator of The Gargoyle is driving along a dark road when he is distracted by what seems to be a flight of arrows. He crashes into a ravine and wakes up in a burns ward, undergoing the tortures of the damned. His life is over - he is now a monster. But in fact it is only just beginning. One day, Marianne Engel, a wild and compelling sculptress of gargoyles, enters his life and tells him that they were once lovers in medieval Germany. In her telling, he was a badly burned mercenary and she was a nun and a scribe who nursed him back to health in the famed monastery of Engelthal. As she spins her tale, Scheherazade fashion, and relates equally mesmerising stories of deathless love in Japan, Greenland, Italy and England, he finds himself drawn back to life - and, finally, to love.

Once Upon A Time In England – Helen Walsh On the coldest night of 1975, a young man with shock-red hair tears though the snowbound streets of Warrington's toughest housing estate. He is Robbie Fitzgerald, and he is running for his life - and that of his young family. In his heart, Robbie knows the odds are stacked against them. In this unbending Northern town, he has married the beautiful brown nurse who once stitched up his wounds. Susheela is his Tamil Princess, but in the real world, the Fitzgeralds have to face up to prejudice, poverty and sheer naked hatred from their neighbours. Now Robbie has seen a way out, and he's sprinting to his date with destiny...But back at their low-rise flat, Susheela hears a noise. This single moment starts a chain of events that will reverberate throughout the lives of all four Fitzgeralds - herself, Robbie, their son Vincent and unborn daughter, Ellie. Over thirteen years of struggle, aspiration, achievement, misunderstandings, near-misses and shattered dreams, Helen Walsh plunges us into the lives and loves of the young, doomed Fitzgerald family. She shows herself to be a brilliant chronicler of our people and our times. And in the Fitzgeralds, she has created a family who will stay in your heart, long after the final page. "Once Upon A Time In England" offers an unforgettable portrait of the world in which we live, and confirms Helen Walsh as a writer of searing power