So I thought what might be a good idea is if as publishers send me their lovely parcels I keep you up to date with what I am reading and then you can see what will be coming up on the blog in the future, what publishers have coming out or in their catalogues and the opportunity to get your mitts on some and read a long. Plus my TBR agenda changes all the time and if I mention the books here now they get a mention… er… now! You know what I mean. So the latest books to arrive are… 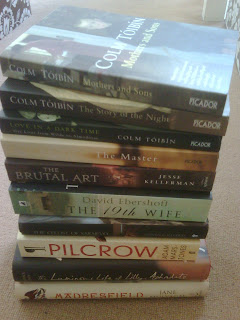 Mothers and Sons - Colm Toibin (Picador)
Colm Toibin's new and challenging collection of stories paint rich and textured portraits of individuals at different pivotal moments in their lives. In each case, Toibin shows how their relationship with either a mother or a son, or their relationship to their own role as mother or son, reveals something unique and important about them. The stories feature Ireland or Irish narrators, but they are also truly universal. In "Famous Blue Raincoat", unwelcome memories are stirred when a mother, once a singer in an Irish folk-rock band of some popular renown in the 60s, finds that her son has been listening to their old records - songs she hoped never to hear again. In "Water", a son buries his mother and goes out to a drug-fuelled rave on a remote beach outside Dublin. In the course of this one night, his grief and desire for raw feeling combine with exquisite and devastating intensity. At once beautifully playful, psychologically intricate, emotionally incisive, finely-wrought and fearless these stories tease out the delicate and difficult strands which are woven between mothers and sons. Sometimes shocking and always powerful, this masterful new collection confirms Toibin as great prose stylist of our time.

The Story Of Night – Colm Toibin (Picador)
Richard Garay lives alone with his mother, hiding his sexuality from her and from those around him. Stifled by a job he despises, he finds himself willing to take considerable risks. Set in Argentina in a time of great change, "The Story of the Night" is a powerful and moving novel about a man who, as the Falklands War is fought and lost, finds his own way to emerge into the world.""The Story of the Night" is, in the end, a love story of the most serious and difficult kind.

Love In A Dark Time - Colm Toibin (Picador)
Colm Toibin looks at the life and work of some of the greatest and most influential artists and writers of the nineteenth and twentieth centuries, figures in the main whose homosexuality remained hidden or oblique for much of their lives. Either by choice or necessity, being gay seemed to come second for many of these writers. Yet in their private lives, and also in the spirit of their work, the laws of desire changed everything for them and made all the difference. Ranging from figures such as Oscar Wilde, born in the 1850s, to Pedro Almodovar, born a hundred years later, this book examines how a changing world altered lives in ways both subtle and fundamental. Colm Toibin interweaves a close reading of the works with detailed analysis of the personalities behind them, to illuminating effect. This is an exceptional collection of essays on sexuality and creativity.

The Master – Colm Toibin (Picador)
It is January 1895 and Henry James's play, Guy Domville, from which he hoped to make his fortune, has failed on the London stage. Opening with this disaster, The Master spans the next five years of James's life, during which time he moves to Rye in Sussex, having found his dream retreat. There he writes his short masterpiece The Turn Of The Screw, a tale in which he incorporates many details from his own life, including his experiences as a member of one of the great eccentric American families and, later, an exile in England. Impelled by the need to work and haunted by his past - including his failure to fight in the American Civil War, and the golden summer of 1865, and the death of his sister Alice - James is watchful and witty, relishing the England in which he has come to live and regretting the New England he has left.

The Brutal Art – Jesse Kellerman (Sphere)
Ethan Muller is struggling to establish his reputation as a dealer in the cut-throat world of contemporary art when he is alerted to a once-in-a-lifetime opportunity: in a decaying New York slum, an elderly tenant has disappeared, leaving behind a staggeringly large trove of original drawings and paintings. Nobody can tell Ethan much about the old man, except that he came and went in solitude for nearly forty years, his genius hidden and unacknowledged. Despite the fact that, strictly speaking, the artwork doesn't belong to him, Ethan takes the challenge and makes a name for the old man - and himself. Soon Ethan has to congratulate himself on his own genius: for storytelling and salesmanship. But suddenly the police are interested in talking to him. It seems that the missing artist had a nasty past, and the drawings hanging in the Muller Gallery have begun to look a lot less like art and a lot more like evidence. Sucked into an investigation four decades cold, Ethan will uncover a secret legacy of shame and death, one that will touch horrifyingly close to home - and leave him fearing for his own life.

The 19th Wife – David Ebershoff (Black Swan)
Jordan returns from California to Utah to visit his mother in jail. As a teenager he was expelled from his family and religious community, a secretive Mormon offshoot sect. Now his father has been found shot dead in front of his computer, and one of his many wives - Jordan's mother - is accused of the crime. Over a century earlier, Ann Eliza Young, the nineteenth wife of Brigham Young, Prophet and Leader of the Mormon Church, tells the sensational story of how her own parents were drawn into plural marriage, and how she herself battled for her freedom and escaped her powerful husband, to lead a crusade to end polygamy in the United States. Bold, shocking and gripping, "The 19th Wife" expertly weaves together these two narratives: a page turning literary mystery and an enthralling epic of love and faith.

The Cellist Of Sarajevo – Stephen Galloway (Atlantic)
This is the top 10 bestseller, now in paperback. Snipers in the hills overlook the shattered streets of Sarajevo. Knowing that the next bullet could strike at any moment, the ordinary men and women below strive to go about their daily lives as best they can. Kenan faces the agonizing dilemma of crossing the city to get water for his family. Dragan, gripped by fear, does not know who among his friends he can trust. And Arrow, a young woman counter-sniper must push herself to the limits - of body and soul, fear and humanity.Told with immediacy, grace and harrowing emotional accuracy, "The Cellist of Sarajevo" shows how, when the everyday act of crossing the street can risk lives, the human spirit is revealed in all its fortitude - and frailty.

Pilcrow – Adam Mars-Jones (Faber & Faber)
Meet John Cromer, one of the most unusual heroes in modern fiction. If the minority is always right then John is practically infallible. Growing up disabled and gay in the 1950s, circumstances force John from an early age to develop an intense and vivid internal world. As his character develops, this ability to transcend external circumstance through his own strength of character proves invaluable. Extremely funny and incredibly poignant, this is a major new novel from a writer at the height of his powers.

The Luminous Life of Lilly Aphrodite – Beatrice Colin (John Murray)
As the clock chimed the turn of the twentieth century, Lilly Nelly Aphrodite took her first breath. Born to a cabaret dancer and soon orphaned in a scandalous murder-suicide, Lilly finds refuge at a Catholic orphanage, coming under the wing of the, at times, severe Sister August, the first in a string of lost loves. There she meets Hanne Schmidt, a teen prostitute, and forms a bond that will last them through tumultuous love affairs, disastrous marriages, and destitution during the First World War and the subsequent economic collapse. As the century progresses, Lilly and Hanne move from the tawdry glamour of the tingle-tangle nightclubs to the shadow world of health films before Lilly finds success and stardom in the new medium of motion pictures and ultimately falls in love with a man whose fate could cost her everything she has worked for or help her discover her true self. Gripping and darkly seductive, The Luminous Life of Lilly Aphrodite showcases all the glitter and splendor of the brief heyday of the Weimar Republic, and the rise of Hollywood to its golden age.As it foreshadows the horrors of the Second World War, the novel asks what price is paid when identity becomes unfixed and the social order is upended.

Madresfield – Jane Mulvagh (Transworld)
Madresfield Court is an arrestingly romantic stately home surrounded by a perfect medieval moat, in the Malvern Hills in Worcestershire. It has been continuously owned and lived in by the same family, the Lygons, back to the time of the Domesday Book, and, unusually, remains in the family's hands to this day. Inside, it is a very private, unmistakably English, manor house; a lived-in family home where the bejewelled sits next to the threadbare, the heraldic and feudal rest easily next to the prosaically domestic. The house and the family were the real inspiration for Brideshead Revisited: Evelyn Waugh was a regular visitor, and based his story of the doomed Marchmain family on the Lygons.Never before open to the public, the doors of "Madresfield" have now swung open to allow Jane Mulvagh to explore its treasures and secrets. And so the rich, dramatic history of one landed family unfolds in parallel with the history of England itself over a millennium, from the Lygon who conspired to overthrow Queen Mary in the Dudley plot; through the tale of the disputed legacy that inspired Dickens' Bleak House; to the secret love behind Elgar's Enigma Variations; and the story of the scandal of Lord Beauchamp, the disgraced 7th Earl.

So I have a fair amount to read you could say. Am really pleased though as can do the Richard and Judy Challenge… well almost!
Posted by Savidge Reads at Thursday, January 22, 2009

Don't know where you're intending to start but I'd start at the top if I were you. Toibin's "Mother and Sons" is quite brilliant .... according to my review at least!

I shall check out that review from you right now... I have actually started Pilcorw which is huge but the voice of the protagonist is superb! I think I might make light work of it!