I was shocked to find that when I went down to Tooting Library it was closed and being completely revamped. This is partly good as it was a bit of an out of date branch but also quite sad as it previously felt like you were walking right back into the late 80’s especially as you could never get any books published after 1989 when you went in. What was secondly shocking was that this book lover hadn’t actually been to the library for almost two years, but then I do have a slight love hate relationship with them which will become more apparent as I go on.

So I went down to Balham library as it is now my closest to go and find some research material on The War of the Triple Alliance (long story) and also the following:
- Faceless Killers – Henning Mankell
- One Day In The Country – J.L. Carr
- Alice in Wonderland – Lewis Carroll
- Burnt Shadows – Kamila Shamsie
Well as I sadly could have predicted none of these were in the actual library and then when I went to the information booth I was shocked. I asked if they could bring copies of these into the library and they said yes they could but for £2.20 a book. Is this normal? I think that’s a bit wrong to be honest, needless to say I didn’t order them in, not when you can buy them second hand from a charity shop for less. I also couldn’t find any books on The War of The Triple Alliance and looking through the databases it appears there aren’t any… no one out there in the blogosphere knows of any do they?

What is good about libraries is that you can have a good long browse and find books that you wouldn’t normally necessarily pick up and read and give them a go which is just what I did as you can see. 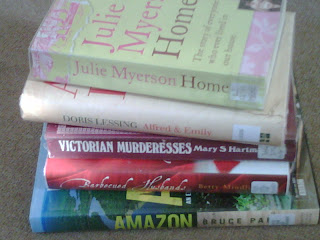 Julie Myerson – Home
She is the talk of the literary town at the moment for some quite unusual reasons and rather than read the book that’s causing the stir and I am not sure I agree with but I thought I would give her a go. There was one book she wrote about a murder and how that affects a community but they didn’t have that. This one sounds great, I love the idea of finding out everyone who has lived in your home and then writing about their lives.

Doris Lessing – Alfred & Emily
I have always quite fancied this and though I have been told that Lessing can be quite hard to digest this book sounds so interesting. Alfred and Emily were Lessing’s parents and she re-writes history in part of the book by making them never meet and what would happen next. Unusual!

Victorian Murderesses
This just grabbed me with the second title ‘Respectable French and English Women Committing Unspeakable Crimes’ sounded a bit different and after The Suspicions of Mr Whicher I fancied some more ‘real crime’ but not one of those Fred West sensational books.

Betty Mindlin - Barbequed Husbands
Now when looking for books on The War of the Triple Alliance (which was between Brazil, where the Non Reader is from, Paraguay etc) I found this wonderful collection of fables and fairy tales from the indigenous people of the Amazon through Brazil. Looking at them briefly since getting back some of them are quite racy but I want to find out more about Brazil and what better than folklore?

Bruce Parry - Amazon
In the same section more about the Amazon from someone who trekked it… which is what I am doing later in the year. Oh I will be a book blogger from Brazil, which will be unusual. Hoping this book gives me some insight and makes me better prepared.

So what little gems have you found in the library you wouldn’t have read before? Do you love your library?
2nd April 2009
Note - This has become a question on Booking Through Thursday today "I saw that National Library week is coming up in April, and that led to some questions. How often do you use your public library and how do you use it? Has the coffeehouse/bookstore replaced the library? Did you go to the library as a child? Do you have any particular memories of the library? Do you like sleek, modern, active libraries or the older, darker, quiet, cozy libraries?"
So will add (as think have answered some of this above)that my local libraries arent the best but the new Tooting one promises to be though I kind of prefer the older libraries that you see in movies and read about in gothic mysteries. In fact its very much my aim to have one eventually, just need the gothic creepy mansion first, and the salary that can pay for it!
Posted by Savidge Reads at Saturday, March 21, 2009

I DO love my library. The one in downtown Orlando is huge, and carries just about anything I would want for. There was one that was written by a Polish author and recently translated that they didn't carry, but were able to do an interlibrary loan for a buck or two. I can't believe yours wanted to charge you to order the darned thing. Isn't that what our taxes pay for? When I walk into my library, I always walk away with little surprises too!

One of the best things about the United States is the public library. While there may not be much on the shelves, or just not much you want, you can order in just about anything under the sun for free. At least you can at mine here in Vallejo, California.

I forgot to add the coolest thing about my library. You can order anything online, and they will deliver it to your door...for free!

I'm very lucky with my local library. You only have to look at my collection on librarything.com (username dsc73277) to see just how many great books I've been able to take out on loan. I've tagged them as "library book" - although not all of the 170+ plus titles so tagged are necessarily from my local branch or even from my local library service. Books held in any of the branches in the borough can be reserved for 80p, either in person or via the website. This charge must barely cover the cost of moving the book between branches, particularly considering that a card is sent out by first class post to tell you when your book is ready for collection.

I could probably afford to buy most of what I read (as second hand paperbacks if nothing else), but since I no longer have the space to hang on to books it makes sense to get them from the library instead. If libraries, like council houses, become thought of as the last resort for those who do not have a choice, then the chances are they will not survive. Far from feeling guilty about getting council tax payers to help feed my reading habit, I regard my library use as helping sustain the library for those who really do rely on it.

I am well-aware that libraries in the UK are under threat. There's an excellent piece on this in The Observer today (http://www.guardian.co.uk/books/2009/mar/22/saving-british-libraries). Excellent in that it highlights the issue in an entertaining way, but very worrying in what it reveals about the jargon-ridden pronouncements and attitudes of the people in power.

It costs £1 for me to order books into my local library, but I do like the fact that I can get a book from any library in Surrey, and return it to any of the others - I find it very useful when I'm travelling around on book hunts.

I'm not a big user of the library, as I forget to take things back! I prefer to buy them myself rather than be hit with fines, or the stress of having to get to a library before a certain date.

It sounds as though they are much more friendly in the US!

It's still free at my library to request books from anywhere in the county, but my mum tells me this is rare so I don't know for how much longer it will be. I use this service a lot because my locallibrary is tiny!

Ah I would love a creepy gothic mansion and library!!

I'm not as lucky as Sandy: no door to door delivery of books, but my library will order in books (interlibrary loan) for free -- audios or print.

I have never heard of a library that makes you pay a delivery fee for books.

I was such a magnet to libraries when I was young. I still remembered that sensation of getting my library card---that felt so privileged and special!

I love going there to read my own books these days!

One of my favorite passages is from A Month in the Country:

“We can ask and ask but we can’t have again what once seemed ours forever—the way things looked, that church alone in the fields, a bed on a belfry floor, a remembered voice, the touch of a hand, a loved face. They’ve gone and you can only wait for the pain to pass.”