Ok so technically this is written on Monday but please, please don’t hold that against me as there is a review coming up a little later on Monday and I don’t like leaving a day blank and try not to where I can. So I thought I would let you know about the Non-Reader and my 1st Wedding Anniversary holiday. It all started out a little to pot when I booked a Eurostar weekend away and the Non-Reader announced on Thursday that their passport had run out. I don’t even want to go down the route of what my head was thinking but some serious string pulling later and that weekend has been postponed by a few months (to tie in with the Non Readers 30th). This then left me with two days (Non Reader is working on Monday) to fill.

Next idea was a trip to Alton Towers, until I saw the train fares and there was no way I was doing a coach trip – you cant even read on those without feeling sick. So then I thought of Thorpe Park! Was just literally about to book when the Non Reader phones and says “we’re not doing anything next Sunday are we as I have told my work colleagues we will go to Thorpe Park with them. So that’s plan three ruined. I was stuck, very, very stuck. In the end I searched long and hard and found a hotel in Brighton free on Sunday night so an early Sunday trip was planned for our actual anniversary date... You all know me so well I can envisage some of you thinking “I bet he bought Graham Greene’s Brighton Rock for the trip” and you would be wrong, I didn’t. I did think about it though. Saturday comprised of the Non Reader being taken first on a surprise trip to Chessington World of Adventures (where I nearly threw up on a rollercoaster for the first time ever and felt very pathetic watching hardcore 8-11 years olds coming off it bouncing along whilst I was green) followed by a surprise trip to see the a circus at Wimbledon Theatre which was jaw droppingly amazing.

Sunday morning’s early departure became an twelve o’clock departure partly because we waited for Sainsbury’s to open for a picnic and partly because we both had hangovers from hell, shamefully from only a bottle of wine between us! So we get on the tube, the Non Reader having no idea where we are going, when a book is produced out of their bag. I tried to think nothing of it; though in the last month the Non Reader has devoured ‘The Cellist of Sarajevo’ and ‘The Thirteenth Tale’ both in their second language. The book ‘Restless’ by Simon Kernick is then devoured on the train… and on the beach. Weirdly myself I was mainly watching tourists, daydreaming and bidding my time until I couldn ‘need the loo’ to go and check into the hotel and then create a real “surprise” which it did and even a few emotional tears. I think the boat had been pushed out when someone wasn’t expecting it to be.

Later on a trip for me to get some shorts, as the weather was amazing, we fell into a book shop as I wasn’t really getting on with any of the reading I had brought and was about to give into the aforementioned Brighton Rock. None in stock as luck (well luck for my bank balance this weekend) would have it but when I came downstairs the Non-Reader is avidly flicking through the books in the 3 for 2 offers and debating ‘if I should get three as am reading much more’. I felt a bit dizzy at that and was worried if I was dreaming. None were bought but there is now a mental TBR list being compiled in the Non Readers head especially Henry by David Starkey “which I really, really want to read” (and is wrapped in gold paper on the Non Readers bedside table for when the come back from work but sssshhhh it’s a secret). I am worried though do I now have competition for my TBR pile? I shall leave you with a postcard from the seaside below. Did you all have lovely weekends? Get much reading done? 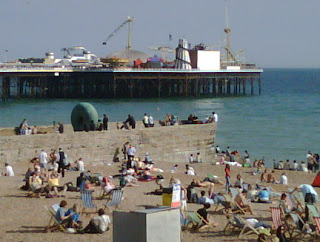 Oh and a little competition as it seems the Non Reader’s non-reading days are on the wane… what new nickname can I use? The best answer gets a stick of Brighton Rock in the post!
Posted by Savidge Reads at Sunday, May 24, 2009

I went to Chessington on Friday! I've just bought a Merlin pass - gets me into Chessington, Thorpe Park, Lego Land etc for a year, so I'll be there quite a few times in the next few months. I didn't go on any scary rides though, as I was with my little boys. I loved the flying elephants though - did you go on them?

I hope you had a great anniversary!

I am in awe of your ability to make the best of a situation. It seems you were determined to make your anniversary special and it sounds like you did. Happy Anniversary. So did your book loving ways convert the Non Reader? If so, I was thinking along those lines for the nickname...The Converted One or the Redeemed Reader. A little religious sounding but the best my non-creative mind could come up with:)

It would be my dream come true if my husband would become a reader. He reads maybe one or two a year at best. Although some of your plans were waylaid, you got away and still had a good time. Good for you!

I was thinking just 'the convert'.

The best laid plans, and all.......so glad it worked out in the end, though.
I would be worried too if my non-reader was seen to voluntarily lift a book from the shelf and I would positively break into a sweat if he opened the cover of one! That TBR pile is all mine!!
How about 'New-Reader' a little like the old name, but, not quite.

Jackie - I will be at Thorpe Park on Sunday, I may see you there!

Book Psmith - you need to give me your address (email me) as The Converted One has made me laugh for about ten minutes I love it!

Sandy - I wouldnt say we are at 'reader' stage, more at 'slightly interested now and then' stage.

Candy - I like 'the convert' but the converted one just has an extra slight quality - sorry! Next time I go to Brighton I will pick you up some rock anyway.

Kim - There will be no touching of my TBR pile, we have seperate ones... it could get out of control!