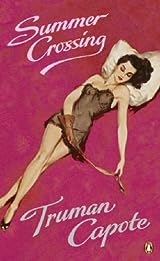 How delightful that as I type the words ‘Summer Crossing’ that the sun is actually streaming through the windows and I can see a cloudless sky, it oddly feels like we’ve skipped spring and summer is actually already here, well in London anyway. Mind you knowing the British weather it will be a rain filled thunderstorm we are greeted to when we wake up tomorrow. I don’t wish that by the way it’s just a thought. Anyway enough of that back to the book.

Summer Crossing is the newly discovered first novel by Truman Capote. It’s taken from four school notebooks and various additional notes in the New York Public Library’s Truman Capote Collection. Various experts and editors have then put it all together, and the part that doesn’t quite agree with me, edited it and added parts where it was illegible. Now this is a double edged sword. The negative is that you don’t know if Capote ever wanted this story read and it partly isn’t a story he totally read or finished (thankfully no one has tried to finish his final novel) and has been fiddled with. The positive is that we get to see more of his work and with this novel in particular we get to see what may have been the beginnings of Holly Golightly forming and Breakfast at Tiffany’s.

Summer Crossing is a tale of first love. Grady’s parents leave her in New York City alone (her sister Apple lives not to far away but is easy to elude and avoid) aged only eighteen. Grady is a bit of a minx. Having previously fallen for her fathers married friend she has actually tried to seduce him when his wife was pregnant whilst also being his wife’s closest friend during her pregnancy. You can tell we have quite a feisty heroine pretty much from the start especially with the conversations with her mother as she stubbornly refuses to go away on a cruise with her or be paraded at any dances where she might meet a potential match.

As we find out Grady is already in love, though not with the sort of society boy her parents would wish for. Clyde is a Jewish Park Attendant who she is immediately attracted and devoted too. What follows is a hedonistic summer where drink and drugs are mixed with early freedom and desire proving a tragic, dangerous and dramatic mix. I loved Grady as a character I thought she was absolutely fantastic. I just didn’t feel I knew any of the other characters really and in that sense you could tell it was an unfinished work and possibly the vague plotting of Holly Golightly.

I kind of wish I had read Breakfast at Tiffany’s after this. Not because I was disappointed or didn’t like Summer Crossing more that it just never quite matched up. I do get the feeling that if Capote had finished it he would have made it a lot longer, taking more time to introduce some of the characters and their personalities and back stories. I also would have liked to have known if the end is the ending he chose (quite possibly as it’s quite shocking and dramatic) or if he had further plans for Grady who is a wonderful, wonderful character. I could have read a lot more about her and her adventures in the past and possibly beyond the book.

All in all I would say if you loved Breakfast at Tiffany’s or are a die hard Capote fan then this is a book you wont want to miss out on. For everyone else it’s a good read but on which you might find you drift away from as you turn the page.
Posted by Savidge Reads at Monday, March 02, 2009

Never read any Capote which I must do something about someday. Like you I am not convinced by other hands finishing, a work so obviosuly not finalised by the author. I guess if it is clearly flagged that that has gone on, and better still comes with endnotes making clear what has happened and where in the text, then it's ok.

Interesting review. I've read a few books like this, unfinished but edited and maybe completed, etc. Even when I was a big fan they were a bit disappointing.

I would like to check out Breakfast at Tiffany's. I just read In Cold Blood last year and loved it.