Managed Many of the Man Bookers?

I was wondering how I could encorporate Harriet Devines very interesting blog on Man Booker winners into one of my blogs. Then I got a lovely parcel of books through the door yesterday which included Liver by Will Self, The Believers by Zoe Heller and The White Tiger by Aravind Adiga. The later was the perfect excuse to talk about Man Booker winners you have managed. 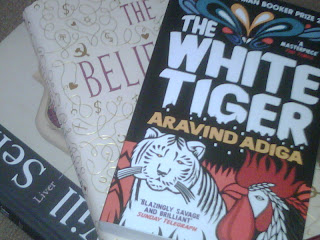 I decided to see how many Man Booker winners I had actually read and even though its only four (one of which I need to re-read) that was two more than I thought I had read. When I started looking at the short lists and the long lists I suddenly felt a little more pleased with my reading efforts. I thought I would share them with you, I have highlighted the ones that I have enjoyed and left the other ones normal, I didnt want to steal Harriets colour co-ordinating idea though I loved it! So the ones I have read are...

I have checked in my TBR pile and TBR boxes and I have quite a few winners, short listed and long listed books to go through so as I do I shall keep you posted. The White Tiger will be going straight to the top 5 of my TBR. I just want to read the shortlisted Secret Scripture by Sebastian Barry and the longlisted Child 44 by Tom Rob Smith. I will add the tag Man Booker to any that have won etc. So have I missed any great ones? Which ones would you recommend I get onto right now and which ones I should possibly avoid?

I'm trying to read all of the books shortlisted for the Booker prize. So far I've read 41 (14 of these are Booker winners) My favourite of them has been A Fine Balance by Rohinton Mistry.

My original aim was to have read them all before the 50th anniversary of the Bookers in 2018, but at 23 books a year I may not quite get there - hopefully I'll be close though!

This is interesting. Just looking at your list I find I have read and enjoyed more of the shortlisted ones than the winners. I must do a recheck and see what colours I can come up with next time!

Farmlane - I had the same thought about reading all the shortlisted books that have been on the lists and though I think that doing it by the 50th anniversary might be quite some feat.

Harriet - I have enjoyed the Man Booker winners that I have read however I would say that I personally like you prefer the shortlisted ones that I have read until now. Looking them all up I was actually shocked at the winners when I saw just which books were on the shortlist. Maybe it just shows I will never prempt a winner lol.

I absolutely love the cover of your White Tiger.. I haven't seen that before. I keep a list of Booker winners I've read on my blog, but this is a good idea to list the shortlist and longlist as well.. I'll copy your idea soon. :D