Before the snow hit London and everything came to a complete and utter standstill I took a trip down to one of my favourite independent book stores in London ‘My Back Pages’ and thought I should share the little book world gem with you. I am a huge fan of independent book shops the do have to be a bit of a jumble though. I know that’s a bit of an odd expression but when I go to an independent book store what I want when I open the door is the smell of used books to hit me straight in the face. I think what I love about these books is that you can get completely lost and immersed in them. It also seeps back to my childhood.

Growing up in Matlock in Derbyshire one of my treats used to be going to Scarthin Books in neighbouring Cromford. I was allowed to occasionally spend £5 in there and they had the most amazing children’s book selection. My Gran now knows that when I go up to Matlock for a visit that a trip to Scarthin has to be on the agenda somewhere. Anyway back to My Back Pages… 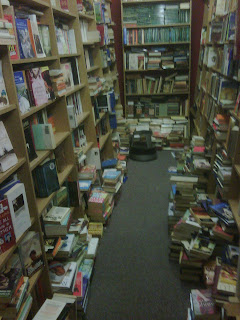 I found this store about a year or so ago completely by accident after one in Merton Abbey Mills (which is down the road in the other direction) closed down. I love book stores with character, my other favourite that I will cover when next pop and visit it is Copperfield’s in Wimbledon. My Back Pages is simply steeped in character. It’s a maze of books with avenues and dead end shoot offs of all sorts of books. The fiction section (pictured) is fabulous and though it looks a jumble, which I think, is part of its charm, and there are books behind books there is a system and fiction is actually sorted into where it originated. You have ‘American Greats’, ‘African Fiction’, ‘Latin Fiction’ frankly I could go on and on and on. Not content with that you have cubby holed shelves of horror, science fiction, crime and that’s just the fiction sections which seem never ending. If you are a Non-Fiction fan then there is a mass of delights which seems never ending. It seriously it’s a book lovers paradise.

I of course was there on a fiction hunt and after a good 45 minute rummage came away with two gems which were Fearney by James Long which I was thrilled to find after missing out on it a few weeks ago, the other was Strangers by Antonia White which I have bought unashamedly for the cover. Yes I do give in to that sometimes, does anyone else? I saw it on Stuck In A Book when he was celebrating Virago green covers of old. Which leads me onto something very special and that from reading the other book blogs I think you all might like… The Virago Shelves. I actually couldn’t fit them all in on the picture as there is a huge selection but you get the gist. 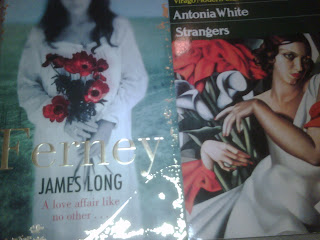 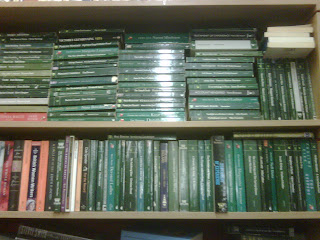 So do you all have little dens of delight for the book lover near you? If so tell me where and I will stop by on my travels… well once the snow allows life to carry on as normal that is!
Posted by Savidge Reads at Tuesday, February 03, 2009

Ah, this is my local treasure trove too (well, not THAT local, but worth the occasional special trip!)

Where is this shop? Why don't I know about it? It looks fabulous. And I love the Virago shelves... I'm just getting into Nina Bawden (published by Virago), but don't want to pay a tenner for each new volume.

Firstly sorry belated replies have been on deadline and had no free time. Julie - its amazing and you must live quite nearish me lol.

Kimbofo, its in Balham south London and its a gem of a place, you'll get most Virago's there for £3!