As soon as this arrived from the lovely people at Penguin I knew I would have to read it pretty much instantly, and that is just what I did. After finishing David Ebershoff’s thought provoking The 19th Wife I wanted something a bit different and Mr Toppit looked just that. From the cover the book looks slightly gothic and ominous (more on the cover later) and that was exactly what I was in the mood to read. If that was what I was expecting it certainly isn’t what I got, however this book was a very pleasant surprise.

Luke Hayman has become world famous after his father Arthur Hayman’s death (this happens early on so am not spoiling the plot) when his series of children’s books ‘The Hayseed Chronicles’ go from being books that shift a few copies to books that become stratospheric selling bestsellers. The reason he becomes immortal is down to the fact his father called the main character, a young boy, Luke Hayseed. The Hayseed Chronicles also tell of a dark evil character called Mr Toppit who never actually appears, though his ominous presence drifts in and out of these tales, until at the end of the 5th novel when he comes out of the Darkwood ‘for everyone’. This to me promised a real mystery, which the book didn’t really deliver.

What it did deliver was two things. The first an insightful look at the trappings of fame, from those like Luke who really don’t want it but have it to his sister Rachel who craves it but isn’t mentioned in the novels. Luke’s story seems to reflect the story of Christopher Milne and his fame from The Winnie The Pooh books. There is also Laurie a woman who was with Arthur when he died and who suddenly becomes part of the family before going back to America and becoming part of the train of events that make The Hayseed Chronicles one of the biggest selling series of children’s books the world over.

The second thing that the book delivers is a fantastic family drama in the form of the Hayman’s and all they have go through when Arthur dies and then when the books become so well known in particular Rachel ‘the unknown sister’ who after her fathers death becomes dangerously obsessed with the books and their subliminal meanings and what could have happened next. It also looks at skeletons in all family’s cupboards and focuses on the fabulous Martha who is such a wonderful character even if she is cold, self obsessed and quite distant.

As for the plot… Hmmm, a puzzling one as I didn’t feel everything got quite wrapped up, which I know some books shouldn’t and I don’t expect all things to work out to a happy ending but I felt like some loose strands along the way were never quite chased up. I also had difficulty when Elton describes how people react to certain world famous scenes from the book that he never really describes them to the reader. I felt that more scenes from the book could have been entwined in the novel and also thought you could have had five interludes where the synopsis of each of the series was thrown in.

The characters, as well as their dilemmas and dramas in this book are undoubtedly what made it such a great read for me. I loved Martha as I mentioned and I loved Laurie’s cantankerous mother Alma equally. I also found the character of Laurie fascinating and in some ways her back story was the one that I found the most interesting as it deals with how childhood shapes us, which can also apply to Luke’s character.

Overall a very interesting debut novel and one that I would recommend to people who like a good family drama, just don’t be expecting the gothic story that the cover suggests. Speaking of covers what I did think was marvellous was the covers, yes covers. I take dust jackets of when am reading a hardback as I don’t like to tear or scuff it, when I removed it I was greeted by a cover of The Hayseed Chronicles which whilst on the tube made me look like I was reading a very big new children’s novel which doesn’t exist… which I quite liked. 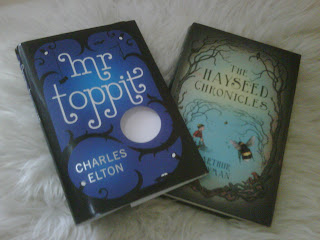 I’d give this novel a 4/5. I actually closed the book wishing I had The Hayseed Chronicles to hand so that I could devour those to read next. Sadly Elton isn’t going to write them.
Posted by Savidge Reads at Tuesday, February 24, 2009